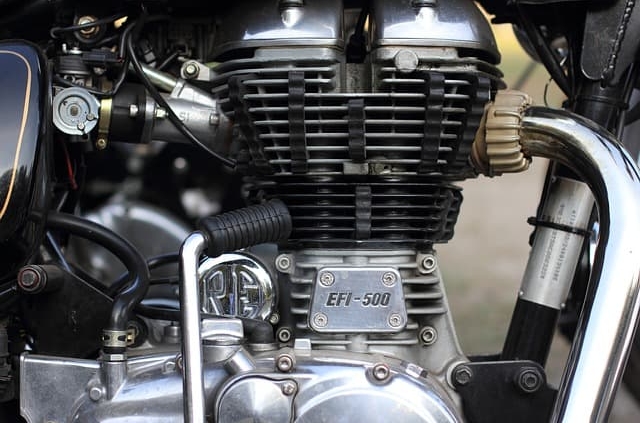 An engine is the heart of a motorcycle. It is the very force that endows a set of two wheels with the magical power to move and mesmerise. The ‘motor’ in a motorcycle – an engine is the centrepiece around which the rest of the componentry revolves. Keeping your motorcycle’s engine in top shape is one of the most important things to do if you wish to enjoy it for a long time. Here in this detailed article, we will share some simple but highly effective tips to increase your motorcycle engine’s longevity so that it functions optimally for years.

Be patient while breaking in

Modern motorcycle engines do not require breaking in as much as their older counterparts. It is still advisable to go slow initially and follow the instructions mentioned in the owner’s manual. Being careful while logging kilometers before a motorcycle’s first service will ensure the engine’s health. Follow the guidelines suggested by the manufacturer while using your motorcycles for its thousand kilometers. Do not rip the motor in its early days and keep the engine speed below the prescribed limits. Once the engine and transmission have correctly settled in, you can let the tachometer needle swing its way higher up the rev range.

Engine oil is the most critical fluid for the longevity of your motorcycle’s engine. Every manufacturer recommends a specific engine oil grade for each one of their two-wheeler models. It is best for the engine to stick to the recommended grade and don’t experiment with this critical specification. You can take the liberty of choosing a higher quality oil for any given grade, and choose among mineral, semi-synthetic or synthetic engine oils based on manufacturer guidelines. However, using engine oil of a different grade than recommended or that of inferior quality can land a fatal blow to the heart of your motorcycle.

Get your bike serviced in a timely manner

Every two-wheeler manufacturer prescribes the ideal service interval for their motorcycles in terms of mileage logged or time elapsed between two consecutive services. It is recommended that you follow the suggested service routine at all costs. Regular service is essential, as several critical components and consumables are inspected and replaced if required during this time to ensure that the vehicle keeps running trouble-free. Read your two-wheeler’s owner’s manual and ensure that you follow its service routine religiously.

Modern motorcycle engines are designed in such a manner that they can withstand long hours of high-performance use without brakes. However, there is a fine line between use and abuse. Inappropriate, abrupt downshifts, over-revving in low gears, not rev-matching, riding the clutch, stunt riding, and shifting gears unnecessarily are some of the things that qualify as abuse. Every vehicle is meant for a purpose – so while performance motorcycles can sustain higher engine speeds for longer durations, commuter motorcycles are designed for more moderate use. Apply common sense and ensure that you don’t push your two-wheeler beyond its limits.

Do not lug the engine

Opening the throttle and trying to accelerate at very low speeds while being in inappropriately higher gears, where the engine struggles to build revs is termed as lugging the engine. Lugging the engine puts it under extreme load and can be detrimental to its life. This malpractice, widespread among Indian riders, leads to engine knocking and sputtering, making it run hot and under immense load. The fuel efficiency of a vehicle is also adversely affected when you are lugging the engine. Understand your engine’s optimal rev range for various scenarios, and keep it within that band to extract the best performance or efficiency from it. Not only is it the correct and more enjoyable way of riding a bike, but it also adds years to an engine’s life.

Replace the air filter in a timely manner

Air-filter plays a crucial role in the efficient functioning of your motorcycle’s engine by feeding clean air to it. Riding a motorcycle with a clogged air filter chokes the engine and drastically reduces its air supply, resulting in long term damage. A clogged, unclean filter can also lead to dirty air entering the combustion chamber, which may cause damage to various critical components of the engine. Most modern two-wheeler air filters are designed to be replaced and not cleaned. Ensure that you replace the air filter on time or clean it if the manufacturer recommends it.

Adjust and lubricate the chain regularly

An overly loose or tight chain on a motorcycle is detrimental to its engine’s health. You should have your motorcycle’s chain inspected and adjusted regularly to avoid this. In terms of lubrication, most modern motorcycle chains are sealed with O-rings or X-rings to keep the grease packed inside the pins. However, budget-oriented motorcycles still come equipped with chains that need external lubrication. For such motorcycles, it is crucial that you clean and lubricate them from time to time and adjust them for slack.

Every motorcycle has its load-carrying capacity, which is the combined weight of the rider and pillion and some buffer for luggage. This is mentioned as payload in the owner’s manual. Loading a two-wheeler up more than its payload capacity puts excessive stress on the engine and can cause damage in the long term. Ensure that you never load your two-wheeler up beyond its prescribed payload limit.

No one knows a two-wheeler’s components better than its manufacturer. While there are cheaper, non-OEM spares available in the aftermarket for most two-wheelers, they are generally not as well-made as the originals. Using cheap spares from the aftermarket might save you some money in repairs, but it might also cause severe damage to your beloved two-wheeler. To extract the best performance and ensure longevity for your two-wheeler’s engine, always get your bike repaired from an authorised service centre and insist on genuine spares.

Idle the engine during cold starts

Engine oil plays a vital role in protecting your two-wheeler’s engine. If a two-wheeler is used frequently enough, its engine components are covered with a thin film of engine oil to mitigate the damage caused by friction when it is cranked up cold. However, if your two-wheeler has not been used for an extended period of time, you need to ensure that you let the engine idle for a minute or so before putting it under load. After long periods of dormancy, engine components lose their protective layer of lubrication as it dries up or settles down. Letting the engine idle for a couple of minutes allows the engine oil to spread to all the critical areas and brings the engine to its optimal working temperature. Cranking up and instantly driving away after a cold start can lead to engine damage. Give it a minute; it is worth it!

A stitch in time, saves nine – the adage rings true for motorcycle engines as well. Always keep a keen eye, and get minor faults fixed before they turn into problems of a larger magnitude. Follow the simple tips shared above, and your two-wheeler engine will not just last longer, but will deliver outstanding performance and fuel efficiency during its lifespan.